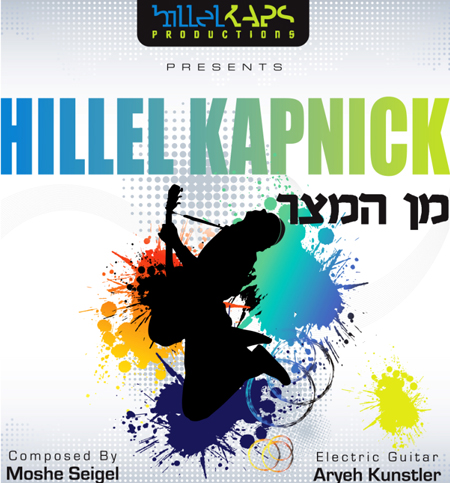 Singer/composer/musician Hillel Kapnick is no stranger to the Jewish music scene. He has been the band leader of One Man Band + Plus a popular one man band for the last two years. He has been featured TWICE on theSaturday Night Segal show with is streamed every motzei shabbos on the NachumSegal.com webstream, which reaches thousands of Jews worldwide.
Hillel also opened up the first of the 2 concerts in the Catskills Summer Concert Series for Michoel Shnitzler, Benny Friedman and Yehuda Green with his own composition. Finally earlier this year, Hillel was one of the finalists at the international singing competition A Jewish Star.
Now Hillel is stepping into a NEW role. With his talents and accomplishments as a musician, composer and singer he is launching hillelKAPS Productions.  What is hillelKAPS Productions? Well, It is your one stop for anything from making demos to recording full fledged albums. They say “seeing/hearing is believing”, and Hillel wanted to show the public just what he can do. With the release of the single “Min Hameitzar”, I believe he did just that. This energetic song was composed by a talented newcomer Moshe Siegel. While the song is not a Hillel Kapnick composition, Hillel really does it justice with his vocals and arrangements. In order to enhance the song even more, Hillel reached out to his friend the talented Musician/composer/arranger Aryeh Kunstler to give it that extra umph!. The song was arranged and recorded by Hillel himself at Uptop Studios (Monsey NY). While Aryeh’s guitars and the mixing and mastering were done by Roar Recording, (Cedarhurst,NY). The song is a FREE download on the hillelKAPS Productions website, visit www.HillelKaps.com today to get your copy.