The Debut Of “Hadran” (VIDEO) 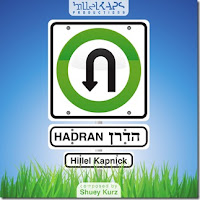 Hillel’s second single “Hadran” was played as part of the video presentation shown at the Siyum Hashas. The song was heard by between 80,000 -100,000 people! This number does not include the countless “hook-ups” that were set in place all over the world for those who could not make it to the Siyum and wanted to participate anyway. Below is a short clip taken at the Siyum itself while “Hadran” was playing.