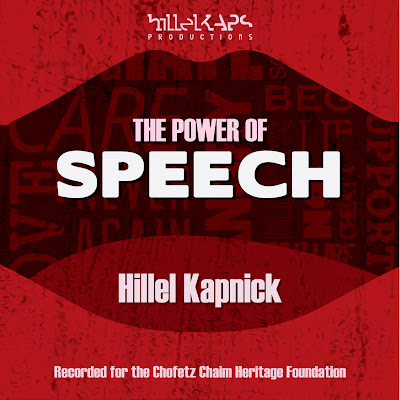 In the technological world we live in where an individual can share their opinion with just a few clicks of a mouse,  guarding ones speech can be forgotten quite easily. Many people can attest to the great power that speech has to help someone while many more can attest to the damage that can be wrought when someone does not guard their speech.  The message that we learn from the Chofetz Chaim is that one who is careful about the words that come out of their mouth will merit a long life. In order to help spread this message Hillel Kapnick  is releasing a new single entitled  “The Power Of Speech”. Originally produced for the Chofetz Chaim Heritage Foundation, it is now being made available for the public. Following his 2nd hit single “Hadran”, “The Power Of Speech” is a song that reminds us of the immense power one has with just a simple word.  Listening to it inspires and allows one to feel the beauty and strength we each possess to create a better world by guarding our speech. When Hillel went about recording this song he picked musicians that would do the song justice. While listening to this song you will hear instruments being played by musicians including Ancient Lullaby’s Shalom Bondar on guitar and Meyer Rosenbaum on flute. Hillel also had the single mixed and mastered by Jewish Musics very own Nochi Krohn. This single is available for free download on www.Hillelkaps.com and Mostly Music.
Credits:
Produced by HillelKAPS Productions (www.HillelKAPS.com)
Composed and Written for Camp Chayil Miriam Lilui Nishmas Hinda Bas Dovid Yuda Hakohen
Recorded and Arranged At: Uptop Studios (Monsey, NY)
Electric Guitar: Shalom Bondar
Flute: Meyer Rosenbaum
Mixed & Mastered By: Nochi Krohn